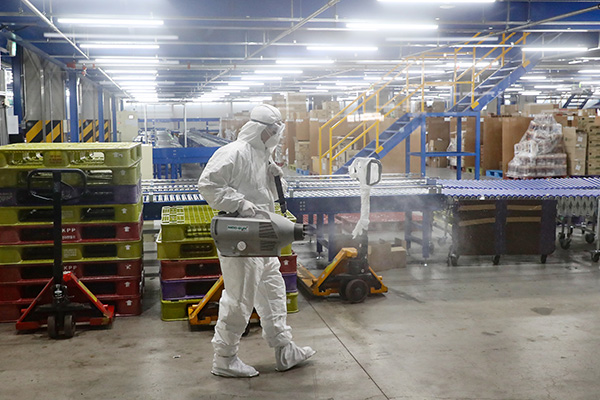 Anchor: South Korea reported on Thursday its highest number of new COVID-19 cases in 53 days as health authorities scramble to contain a cluster of infections that began in a distribution center near Seoul. Officials are now strengthening disease prevention measures at around 1,400 logistical facilities nationwide.
Mark Wilson-Choi has more.

Vice Health Minister Kim Kang-lip addressed the alarming spike in cases during a press conference, while emphasizing the jump in recoveries and slowdown in virus related deaths.

[SOUNDBITE: (Korean) Kim Kang-lip, South Korean deputy health minister]
"As of May 28 midnight, there are 79 new coronavirus cases; 68 are local community infection cases and the rest are from abroad. Among the local community infection cases, 54 of them are from the parcel delivery distribution center and as of today there are 69 cases related to the same distribution center. We are seeing a large number of cases after a total inspection."
"Up to midnight on May 28, there have been 11,344 cases and 10,340 people have been discharged after being treated. There are currently 735 patients being treated. Fortunately there were no deaths overnight."

Thursday's figures represent the highest since April 5, when the nation recorded 81 infections, and the first time since April 8 that the number has surpassed 50. One goal of the government's "everyday life quarantine" is to keep the daily infection tally under 50.

Confirmed cases have surged over the last two days, largely due to the spread of a cluster that started in a logistics center in Bucheon, Gyeonggi Province, operated by e-commerce platform Coupang.

That cluster appears to have spread to another logistics center in southeastern Seoul operated by fellow e-commerce platform Market Kurly and a large-scale call center in Bucheon where one-thousand-600 people work. This has sparked concern that related infections will keep spreading for the time being.

In order to combat the latest flareup, Vice Minister Kim also announced the government is expanding disease control measures currently in place for the delivery industry to include around one-thousand-400 warehouses and other logistics facilities nationwide.