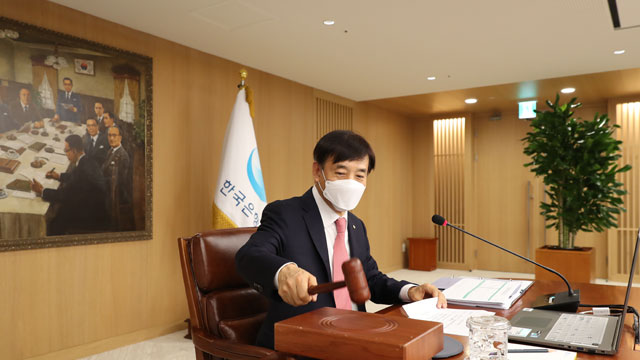 Anchor: The Bank of Korea slashed its benchmark interest rate by a quarter of a percentage point to a record low of point-five percent on Thursday. The same day, the central bank also downgraded its GDP growth forecast for 2020 from two-point-one percent to minus point-two percent.
Kim Bum-soo has more.

Report: The Bank of Korea(BOK) says the South Korean economy will contract point-two percent this year due to the fallout of the coronavirus outbreak.

Addressing the gloomy outlook in an online news conference Thursday, BOK chief Lee Ju-yeol explained that even that’s based on the premise the pandemic will ebb after peaking in the second quarter.

[Sound bite: Bank of Korea Governor Lee Ju-yeol (Korean)]
"This year's growth is predicted at minus point-two percent, based on our presumption of how the COVID-19 situation will develop. Our basic scenario is that new and accumulated global infection tallies will hit the highest during the second quarter and begin to subside. And at home, [we assumed that] although sporadic local transmissions can occur, a major outbreak won't happen."
"If I give the rough numbers, the basic scenario says minus point-two percent and under a positive scenario, the growth rate will slightly rise to the plus range. However, under a pessimistic scenario, the drop to the minus range will be relatively big."

It's the first time in eleven years that the South Korean central bank has predicted negative growth. It had initially expected two-point-one percent GDP growth this year.

[Sound bite: Bank of Korea Governor Lee Ju-yeol (Korean)]
"Like the global economy, the real economic growth is slowing down at home. As consumption continues to be sluggish, exports have fallen by a large margin and facility investment is not being recovered. With the impact of COVID-19 being substantiated, employment has fallen by a large margin, especially in the service sector."

The BOK also held a monetary committee to slash its benchmark interest rate by a quarter of a percentage point to a record low of point-five percent.

Lee said that the figure is close to the lowest his bank can set the base rate at.

[Sound bite: Bank of Korea Governor Lee Ju-yeol (Korean)]
"Effective lower bound is a fluid notion depending on the base rate of major countries and financial market conditions at home and abroad. Of course, the latest rate cut brings our key rate to very close to our effective lower bound... In terms of currency outflow, it is reasonable to say that our effective lower bound is set higher than that of the U.S. or other major economies. If the U.S. Fed lowers its rate to the minus range, the bottom line could change and our policy capacity could rise by that much."

In March, the BOK reduced the base rate to point-75 percent from one-point-25 percent in its first emergency rate cut since October 2008.