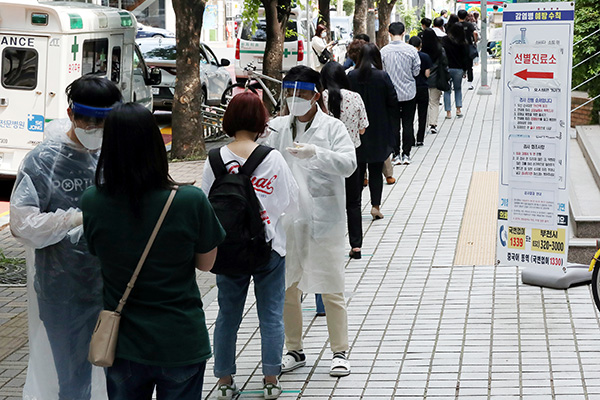 Health authorities suspect quarantine guidelines were not properly followed at the Coupang logistics center in Bucheon, which has emerged as the latest hotbed of infections, involving more than 80 cases so far.

Officials are still investigating the exact route of infection at the e-commerce giant's facility based on the belief that basic rules such as social distancing and wearing masks may not have been followed.

Kwon Jun-wook, deputy director of the Korea Centers for Disease Control and Prevention, said at a press briefing Thursday that it's very likely workers did not abide by guidelines in areas such as the cafeteria and smoking room.

Kwon also confirmed that traces of the virus had been detected in samples collected from employees' caps and shoes worn at the center.

Authorities are urging people at workplaces to keep their masks on in rest areas and dressing rooms and not to gather in communal spaces.

In particular, they are advising against the use of smoking rooms altogether, instead recommending people step outdoors to smoke.

Kwon said smoking is regarded as a high-risk activity in terms of COVID-19, as people likely take off their masks and are in close proximity with others in an enclosed space.
Share
Print
List