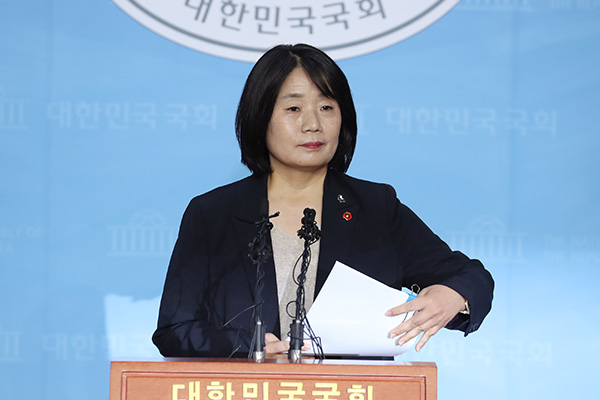 Anchor: Lawmaker-elect Yoon Mi-hyang has stood up against accusations of misappropriation once again. In a news conference at the National Assembly, Yoon claimed that all funds raised to help victims of Japan’s wartime sexual slavery were delivered as promised.
Kim Bum-soo has more on this.

Report: The former head of the civic group Korean Council for Justice and Remembrance for the Issues of Military Sexual Slavery by Japan denied accusations of fund misappropriation.

Lawmaker-elect Yoon Mi-hyang of the ruling Democratic Party on Friday held a news conference at the National Assembly as she faced snowballing corruption allegations.

[Sound bite: Rep.-elect Yoon Mi-hyang - Democratic Party (Korean/English translation)]
"Regardless of [my intentions to] carefully listen to the criticism and opinions raised by Grandma Lee Young-soo, it is a false claim that funds raised for the purpose of providing cash to the victims were not delivered to them."

Elderly sex slavery victim Lee Yong-soo held a series of news conferences this month accusing the civic group of selling out victims to raise funds, which she said never benefited the victims.

During Friday's news conference, the activist-turned lawmaker-elect said the Korean council faithfully spent the money raised for the victims' living and welfare, but fundraising projects were also carried out for various other purposes, including awareness campaigns and education. She admitted, however, that it was problematic for her to have received donations through her personal bank account.

While denying various allegations of wrongdoing raised by the media, she also apologized to the elderly victims and the Korean public for failing to live up to their expectations.

[Sound bite: Rep.-elect Yoon Mi-hyang - Democratic Party (Korean/English translation)]
"Once again, I would like to apologize for not living up to the expectations and support of the public and the elderly victims. I will thoroughly respond to the allegations in order not to damage the honor of the victims and the council's 30-year history of activism. If there are problems, I will take the corresponding responsibility. However, I would like you to stop defaming the achievements the victims and the council made together and distorting facts."

The civic group has been at the forefront of representing victims of Japan’s wartime sexual slavery, euphemistically called "comfort women," and most famously as the organizer of the weekly Wednesday Protest in front of the Japanese Embassy in Seoul.

Historians suggest hundreds of thousands of women from various countries were forced to work in military brothels for Japanese soldiers during World War II. Most of them were from Korea, which was colonized by Japan for 35 years until 1945. Japan, however, denies the forced nature of its military "comfort women" program.
Kim Bum-soo, KBS World Radio News.
Share
Print
List