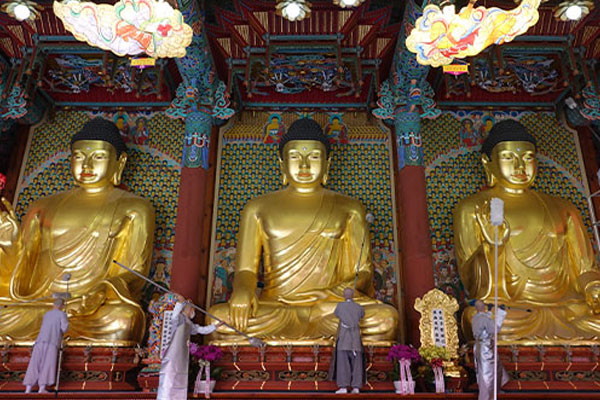 Ceremonies were held Saturday at some 20-thousand temples nationwide to celebrate Buddha's birthday. The events had been pushed back a month due to the coronavirus pandemic.

The South Korean parliament kicked off a new term on Saturday and lawmakers also attended the event including floor leaders of the ruling Democratic Party and main opposition United Future Party as well as the chairwoman of the minor Justice Party.

Ven. Wonhaeng, chief monk of the Jogye Order, said in a speech that the ceremony could take place thanks to government officials including the president and the dedicated medical workers and the Korean public who persevered inconveniences during the pandemic.

He said this world is all connected and if people strive to think, talk and act like Buddha, the Buddhist Hwaeom philosophy can be achieved all over the world.

This year's events were considerably scaled back in efforts to contain the outbreak. Guests wore masks and were seated in line with distancing rules.
Share
Print
List