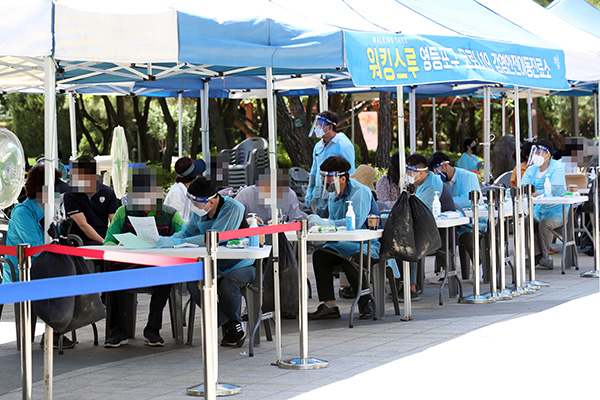 The number of new COVID-19 cases in South Korea has surged back to over 30 after a new cluster emerged in connection with a church meeting in Incheon and Gyeonggi Province.

The Korea Centers for Disease Control and Prevention(KCDC) on Monday reported 11-thousand-503 cumulative cases tallied as of 12 a.m., including 35 cases in the past 24 hours.

Among the latest cases, 31 were from the Seoul metropolitan area, including 18 in Incheon, all of which traced back to a meeting of pastors and church members last Thursday. The infections are believed to have spread from one participant, a 57-year-old pastor, who tested positive in Bucheon, Gyeonggi Province.

The daily hike in new cases hovered around 80 on Thursday due to a cluster linked to a Coupang distribution center in Bucheon, but declined to 58 on Friday, 39 on Saturday and 27 on Sunday.

Meanwhile, the number of deaths related to the infectious disease rose by one to 271.
Share
Print
List