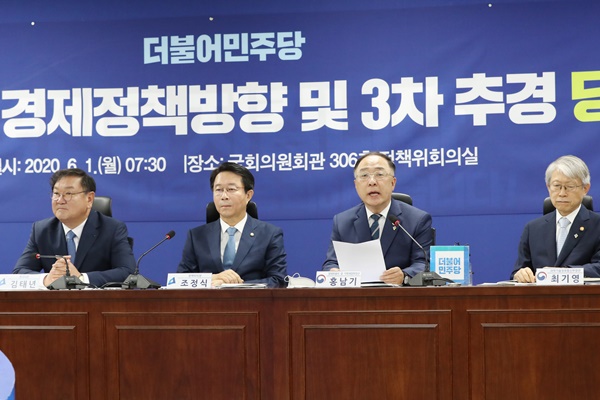 The ruling Democratic Party(DP) and the government have agreed to provide ten trillion won in emergency financial assistance for small business owners to help them cope with the COVID-19 crisis.

The agreement was made during a ruling bloc meeting on Monday, where they also agreed to draft a third supplementary budget for this year that is set to be the largest ever.

The financial aid will be delivered through the expansion of the credit guarantee fund. An agreement was also made to inject over 30 trillion won into the creation of bond and stock market stabilization funds to assist large-sized companies.

The details of such moves will be laid out in the economic policy direction for the second half of the year, which will be announced this month, a month earlier than usual to reflect the government’s push to boost the economy.

The DP and the government also agreed to set up 41-thousand free wifi zones across the nation by 2022 to help ease the burden of telecommunication service fees on households.

As part of efforts to contain the pandemic, they also agreed to administer free flu shots to two-point-35 million additional children by raising the age threshold of the beneficiary group to 18 from 14.
Share
Print
List