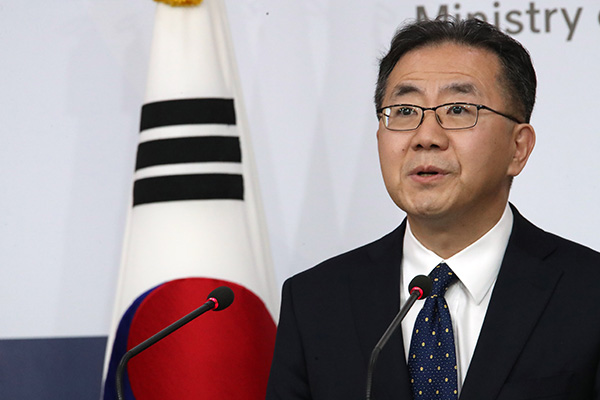 South Korea's Foreign Ministry on Thursday refused to comment on a local court decision that opens the way to liquidating assets seized from Japanese companies that have ignored Korean court orders to compensate victims of wartime forced labor.

Ministry spokesperson Kim In-chul said in a regular briefing that as the delivery of a "public notification" of a court ruling is a judicial procedure, the administrative branch has nothing in particular to say on the matter.

He said the ministry has repeatedly conveyed to Tokyo its position on the forced labor rulings, and its stance remains unchanged.

Kim said Seoul is doing all it can to closely consult with Japan.

He said the government is trying to explore a reasonable solution with an open attitude while respecting the judiciary's judgement and victims rights while also considering bilateral relations.

Regarding possible retaliation by Tokyo, the spokesperson said diplomats will continue to communicate and talk.

He added the latest judicial decision was not discussed during Wednesday's phone call between the two countries' foreign ministers.
Share
Print
List