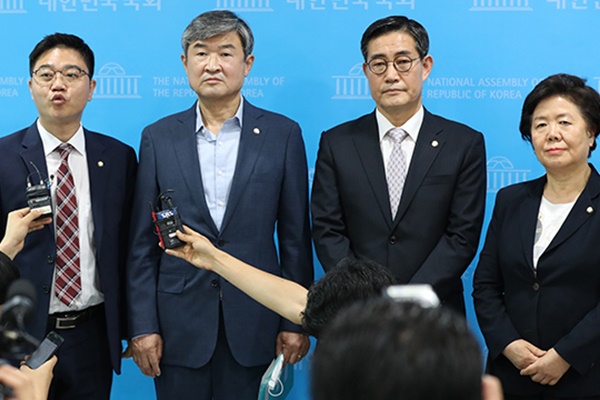 The main opposition United Future Party(UFP) has criticized the government’s plan to legislate a ban on anti-Pyongyang leaflet campaigns led by North Korean defectors in the South.

Three lawmakers from the conservative party, including defector-turned-politician Ji Seong-ho, held a joint press conference on Friday and labeled the prospective legislation as a command from Kim Yo-jong, referring to North Korean leader Kim Jong-un’s powerful sister, who slammed the civilian campaigns the previous day.

Hours after Kim’s criticism was delivered, the South Korean Unification Ministry called for a suspension on the leaflet campaigns, which it said threaten the lives and property of residents in the border region and aggravated cross-border tensions. It also announced a plan to ban them.

The three UFP lawmakers accused the Moon Jae-in administration of going too easy on North Korea and even following its orders. They also slammed the proposed ban as one of the most subservient acts even taken by a South Korean government toward the North and a violation of the constitutional freedom of expression.