Moon: Creating a Korean Peninsula Free of War is Responsibility of State 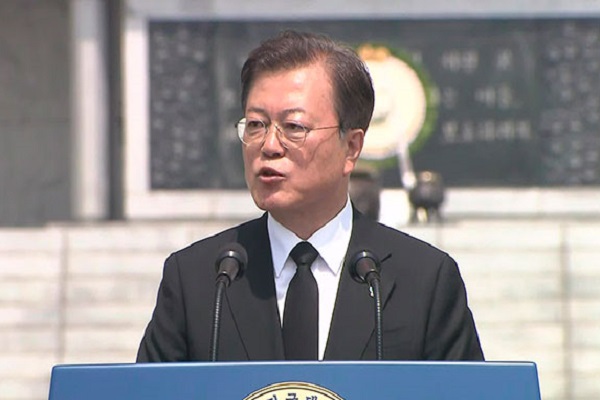 President Moon Jae-in said Saturday that establishing a Korean Peninsula of peace that is free from war forever is a core responsibility of the state given by the people.

During a speech at the 65th Memorial Day ceremony held at Daejeon National Cemetery, Moon said people have the right to live in and enjoy peace.

Moon said that in order to protect and build peace, the government will exert all-out efforts for stronger national defense and security.

He said national independence and defense is the root of the Republic of Korea today, and the pride of safeguarded the country can be seen today in the form of democracy.

The president said recognizing patriotism is one of the most important policy tasks and the administration will continue to increase benefits to support those who served the country and the bereaved families of those who lost their lives.

This year's event was scaled back and the location also changed from Seoul to Daejeon in consideration of coronavirus fears running high in the Seoul metropolitan area.

Some 300 people attended the ceremony including government officials, Korean War veterans and meritorious activists who fought for the nation's independence or democratization. Families of civil servants who died during the COVID-19 pandemic were also among the guests.

A moment of silence, the laying of flowers and incense burning was followed by memorial performances and speeches.
Share
Print
List