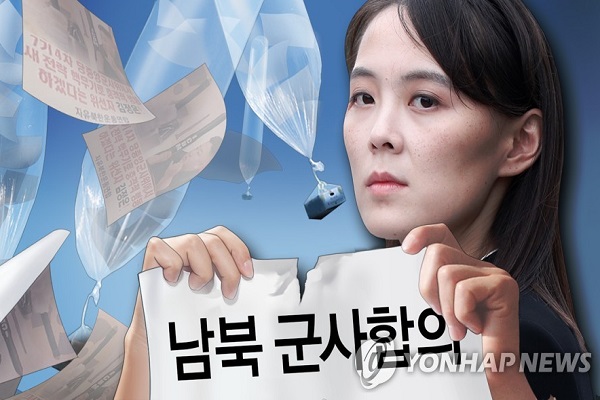 North Korea has threatened to sever inter-Korean relations as it criticized an anti-Pyongyang leaflet campaign carried out by North Korean defectors in South Korea and the Seoul government's response to it.

In a spokesperson statement, North Korea's United Front Department (UFD) said that Kim Yo-jong, who oversees South Korea-related affairs, ordered officials to look into implementing a series of measures she had earlier threatened to take if Seoul did not stop North Korean defectors from sending the leaflets.

The department also vowed to abolish the inter-Korean liaison office located in the North's Gaeseong Industrial Zone, which it says "sits idly by with no work."

It added it will go on to take the series of measures previously alluded to.

The United Front Department also criticized South Korea's Unification Ministry's announcement that it was preparing legislation to regulate distribution of propaganda leaflets, saying it is only an excuse.

It questioned how Seoul was able to sign a military accord with Pyongyang to stop all hostile activities in the border area without such legislation in the first place.

The UFD said until a bill is implemented, the South has nothing to say and North Korea is determined to go as far as the evil cycle of confrontation takes it.

In a statement Thursday, Kim Yo-jong blasted the leaflet campaign and threatened to take a number of measures including closing the liaison office, scrapping the 2018 cross-border military agreement and completely dismantling the Gaeseong Industrial Complex, which is a joint industrial park where operations are now suspended.

The UFD said the latest event makes it all the more clear that "an enemy is an enemy" and that North Korea has long contemplated decisive measures to eliminate provocations from South Korea and remove any contact with the South.
Share
Print
List