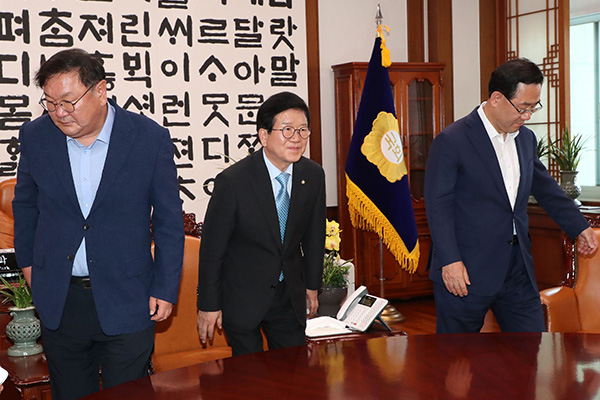 South Korea’s rival political parties have failed to reach a deal on how to split the leadership posts of key parliamentary committees.

The floor leaders of the ruling Democratic Party(DP) and the main opposition United Future Party(UFP) held talks presided over by National Assembly Speaker Park Byeong-seug on Monday morning but failed to see eye-to-eye on the issue, according to floor officials from the two parties.

UFP Floor Leader Joo Ho-young confirmed in a meeting with reporters that the talks had broken down.

Joo and his DP counterpart Kim Tae-nyeon plan to reveal the respective stances of their parties on the matter soon.

The two sides had entered talks amid a report that they significantly narrowed differences over the distribution of the heads of 18 standing committees through negotiations on Sunday.

Speaker Park said earlier that he will convene a plenary parliamentary session at 2 p.m. Monday regardless of the results of the final negotiations.
Share
Print
List