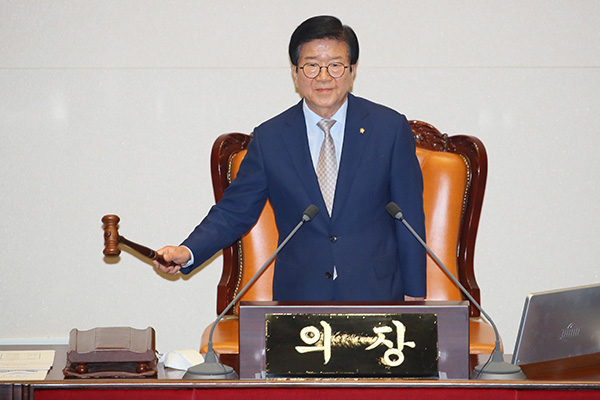 He made the remarks during a plenary session of the Assembly on Monday after the ruling and opposition parties failed to reach a deal on how to split the leadership posts of key parliamentary committees during negotiations.

The speaker said it's been exactly one month since the 21st Assembly has kicked off and he is truly sorry before the public over the current state where even the appointments of committee heads remain unfinished.

He said rival camps prepared a draft agreement on the leadership posts Sunday evening and it was to go into effect Monday morning, but the opposition has yet to ratify the deal.

Park said current times constitute an emergency due to the coronavirus pandemic, economic difficulties and strained inter-Korean relations and he vowed to conclude the election of parliamentary committee heads on Monday as public woes over jobs and livelihood can no longer be neglected.

He said lawmakers must serve the public and protect national interests and nothing can trump this responsibility.

The Justice Party did attend but said it will not take part in the election of committee heads as a gesture of protest to the failed negotiations between the two major parties.
Share
Print
List