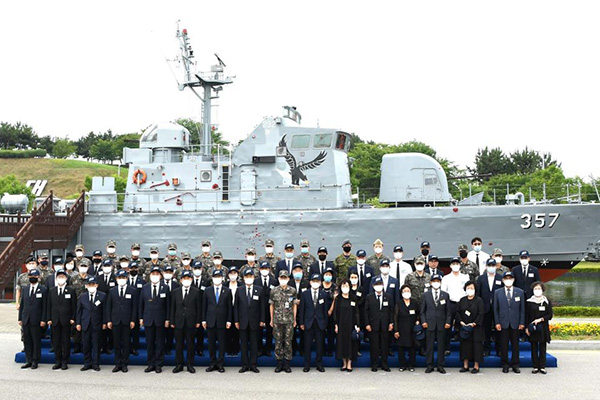 The Navy Second Fleet held a ceremony Monday at its Pyeongtaek headquarters to mark the 18th anniversary of the Second Battle of Yeonpyeong in 2002.

Around 130 people attended the event including those who fought in the inter-Korean skirmish and the families of six sailors who were killed.

In the morning of June 29, 2002, during the South Korea-Japan World Cup, North Korean naval forces launched an attack on a South Korean patrol vessel after crossing the Northern Limit Line, which is the de-facto sea border separating the two Koreas.

Despite the sudden attack, sailors on the vessel managed to retaliate and defend the NLL, but six lost their lives during the exchange while 19 were wounded.

The North Korean side is believed to have had some 30 killed or wounded.

The Navy in 2017 named six warships after the six men who paid the ultimate price defending the country and appointed their fathers as honorary captains.
Share
Print
List