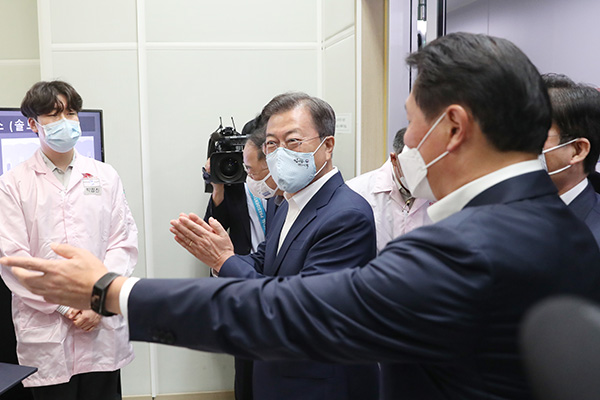 President Moon Jae-in stressed the need for South Korea to become a global powerhouse in materials, parts and equipment.

Moon made the remark Thursday when he visited SK Hynix, which has succeeded in the domestic development of semiconductor parts.

The president said South Korean industries have seen no glitches in production though it’s been a year since Japan slapped export restrictions on some key materials in the semiconductor and display industries.

Emphasizing that South Korea will take a different path from Japan, Moon said Korea will turn the crisis into an opportunity to emerge as a major country in terms of cutting-edge materials, parts and equipment.

To that end, Moon unveiled an initiative to foster high-tech industries.

Under the initiative, the government will aim to increase key management items from 100 to 338, invest one-and-a-half trillion won to attract high-tech projects, and create subsidies for South Korean businesses that relocate their production bases from overseas back home.
Share
Print
List