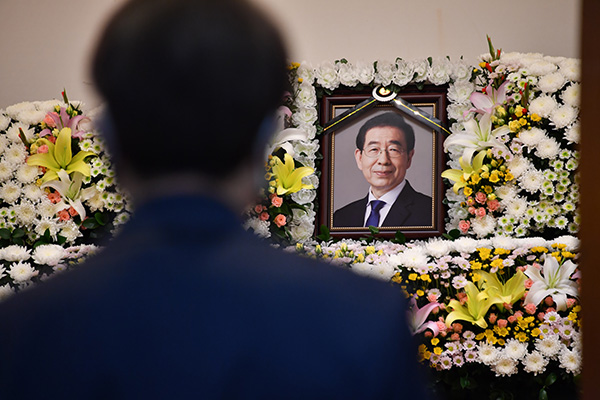 Anchor: The mayor of Seoul, Park Won-soon, was found dead in an apparent suicide hours after his daughter reported him missing. The presidential hopeful and women's rights champion had been accused by his former secretary of sexual harassment.
Kim In-kyung has more.

As his body was taken to a hospital, police said on Friday that it was found around midnight at Mount Bugak in northern Seoul, where he was last seen alive. It is believed he committed suicide.

[Sound bite: Choi Ik-soo, chief of crime department - Seoul Metropolitan Police Agency (Korean/English translation)]
"Police conducted an extensive investigation of seven hours after receiving a missing person's report from Mayor Park Won-soon's family at around 17:17 on July 9. [The mayor] was found dead on a hill near the Mount Bugak fortress in Seongbuk district at around 00:01 on July 10."
"More investigation is needed, but there is no suspicion of murder at this point..."

Around 700 officers, drones equipped with thermal-imaging cameras and search dogs were mobilized after CCTV footage showed that the mayor arrived at Waryong Park on the mountain Thursday morning.

His death came two days after a former Seoul City employee reportedly filed a police complaint accusing the mayor of sexual harassment. She is known to have testified to police that in addition to harassing her, Park sent her his personal photos since she began to work as his secretary in 2017.

An investigation into the accusation, however, will be halted with the mayor's death.

Seoul City will be run by first vice mayor for administrative affairs, Seo Jeong-hyup, until a by-election next April. The acting mayor expressed his condolences in a press briefing on Friday.

[Sound bite: Acting Seoul Mayor Seo Jung-hyup (Korean/English translation)]
"We do not know how to express our sadness. We are so sorry to hear about the loss and hope he rests in peace. Our hearts also go out to our citizens who have been saddened and confused by the sudden news. The administration of Seoul City should continue without interruption in accordance with Mayor Park Won-soon's philosophy that prioritizes the safety and welfare of the city. We ask our citizens to help us continue administering the city. Again we pray that he will rest in peace."

Park said in a will found on his desk the previous day that he is thankful to everyone in his life and sorry to his family, to whom he only gave pain.

The third-term mayor from the ruling Democratic Party had been considered one of the major contenders for the 2022 presidential election. He had long worked as a human rights lawyer and a civic group leader before taking office as the mayor of the South Korean capital by winning the by-elections in 2011.
Kim In-kyung, KBS World Radio News.
Share
Print
List