Late Mayor Apologizes to Family, Supporters in Will 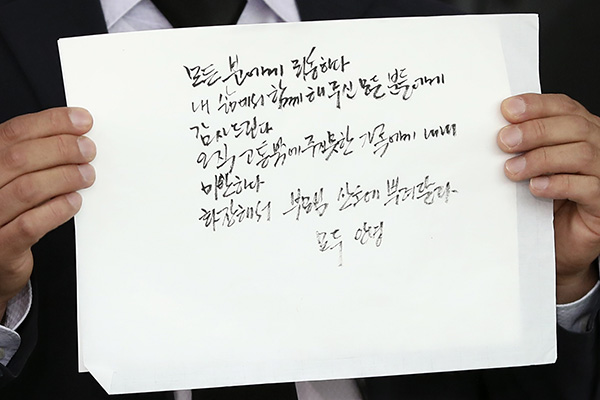 The will of late Seoul Mayor Park Won-soon, which was reportedly written before he left his official residence Thursday morning, was released to the public.

Park's chief secretary unveiled the content of the note to the press on Friday, in which Park apologized to everyone and thanked those who had been part of his life.

The late mayor then apologized to his family, saying he had only caused them pain.

He asked that his remains be cremated and the ashes scattered at his parents' gravesite, before saying goodbye for one last time.

The note was discovered on Park's desk in the study.

Park was reported missing by his daughter Thursday afternoon and an extensive search by the police and fire authorities led to the discovery of his body on Seoul's Mount Bugak early Friday.
Share
Print
List