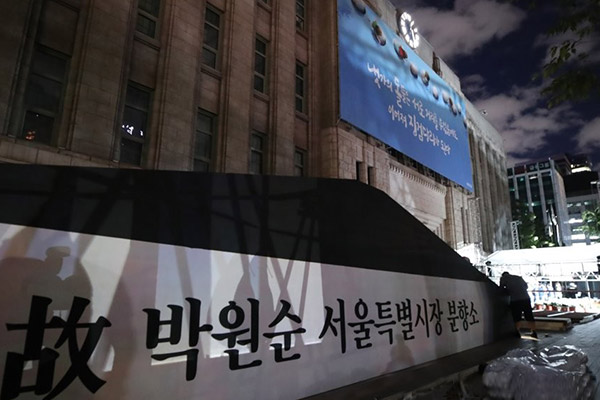 A memorial altar has been set up in front of Seoul City Hall for citizens to pay their respects to the city's late mayor Park Won-soon.

The altar began to receive mourners at 11 a.m. Saturday.

Park's funeral parlor at Seoul National University Hospital is only open to family and acquaintances of the late mayor.

Seoul's Vice Mayor for Administrative Affairs Seo Jeong-hyup, who is now serving as acting mayor, visited the hospital Saturday to pay his respects.

Park's funeral will be held as a five-day mayoral funeral through Monday organized by Seoul City, the first of its kind.

Meanwhile, the Seoul Metropolitan Police Agency said Friday no foul play is suspected based on on-site forensics, coroner reports, statements from family and City Hall officials and the content of Park's will.

It said that in accordance with the family's wish, there will be no autopsy and the body will be handed to the family.
Share
Print
List