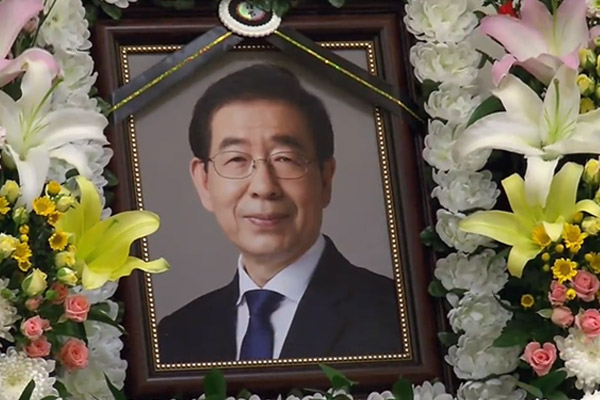 A petition posted on the presidential petition website expressing opposition to the five-day mayoral funeral for late Seoul Mayor Park Won-soon has drawn support from some 370-thousand citizens in just one day as of Saturday morning.

The petition, posted Friday, said that following Park's death, an investigation into his alleged sexual harassment has been closed even before it could properly begin.

The author of the post argued that a quiet family-led funeral would be more appropriate and rhetorically asked why the public needs to watch an elaborate five-day funeral for a prominent politician accused of sexual harassment.

The late mayor currently rests at Seoul National University Hospital and his coffin will be carried out on Monday.

Announcing the decision to host a city-administered five-day funeral, Seoul City earlier said it reviewed relevant manuals on government protocols and also considered the fact that Park had served as mayor for nine years.

As the petition has garnered over 200-thousand signatures, the presidential office is expected to convey an official response within one month of the date the petition closes.
Share
Print
List