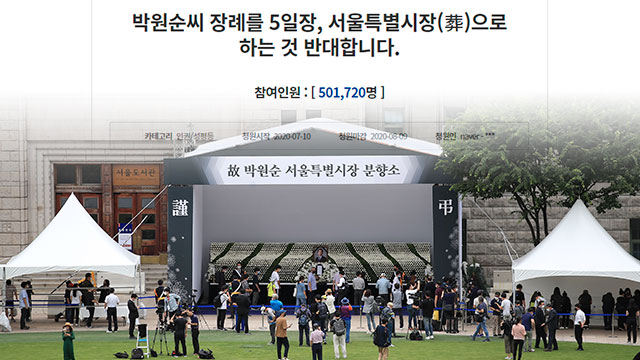 More than 500-thousand people signed a petition expressing opposition to a plan to hold a mayoral funeral for late Seoul Mayor Park Won-soon.

The petition was filed with the presidential office's website on Friday and drew 500-thousand-800 signatories as of 11 a.m. Sunday.

The petitioner said that Park's funeral should be held in a low-key manner in the format of a family funeral, noting that the investigation into his alleged sexual harassment became impossible due to his death.

The controversy mainly stems from the fact that Park apparently took his own life in the face of a probe into suspicions that he had sexually harassed a former secretary.

Seoul City plans to hold a mayoral funeral for Park on Monday after a mourning period of five days.

The presidential office is supposed to publicly address the petition as it has done for every petition on the Web site that exceeds 200-thousand signatures within 30 days of being posted.
Share
Print
List