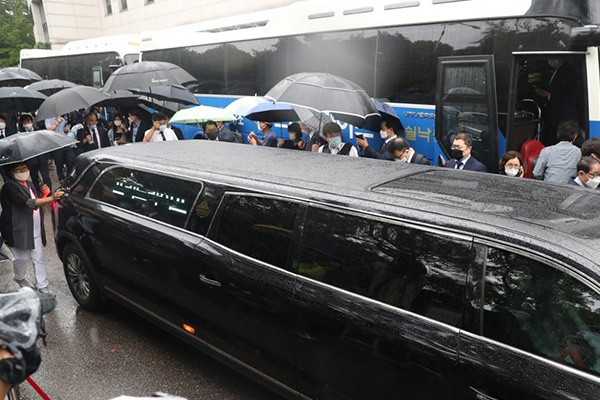 More than 20-thousand people paid tribute to late Seoul Mayor Park Won-soon at a memorial altar set up in front of City Hall.

According to the city government, 20-thousand-382 citizens visited the altar on Saturday and Sunday. It is open to citizens from 8 a.m. to 10 p.m. Park's funeral service is scheduled for Monday morning, but the city will operate the public memorial altar until Monday night.

About 85-hundred mourners visited another memorial altar set up at Seoul National University Hospital as of 8 p.m. Sunday.

An online memorial altar created on the city's homepage on Friday night drew more than one million mourners as of Sunday evening.

Meanwhile, as of Sunday evening, nearly 550-thousand people signed a petition expressing opposition to a plan to hold a mayoral funeral for Park. The petitioner said that Park's funeral should be held in a low-key manner much like a family funeral, noting that the investigation into his alleged sexual harassment became impossible due to his death.
Share
Print
List