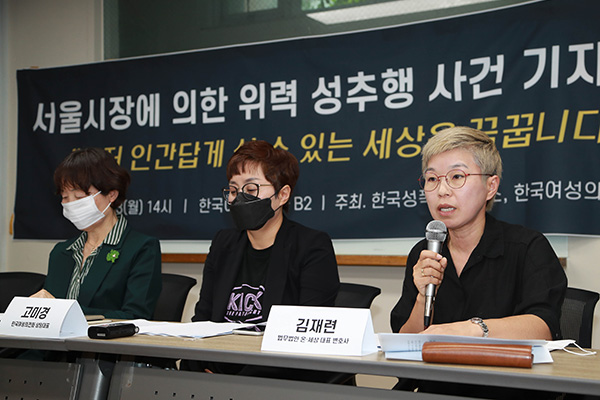 A former secretary of late Seoul Mayor Park Won-soon, who accused him of sexual misconduct, has claimed that she had suffered from such abuse for as long as four years.

A legal representative for the woman held a press conference on Monday and revealed some of the details of the accusations directed against the third-term mayor, who was found dead after he was reported missing by his daughter on Thursday.

The press conference was held soon after the five-day city-administered funeral for the 64-year-old politician ended with a cremation ceremony at a Seoul memorial hall.

The alleged victim’s counsel argued that she was harassed in the mayoral office and in a bedroom located within the office, with the mayor on one occasion kissing her knee and asking her to hug him on another.

They claimed Park also attempted to contact her earlier this year after she was no longer working with him, by inviting her into a secret chatroom.

They said the woman also suffered secondary damage following Park’s abrupt death and called for an investigation into the case to reveal the truth.

The related allegations against the late mayor were filed with police last Wednesday, but they decided to close the case citing the suspect’s death.
Share
Print
List