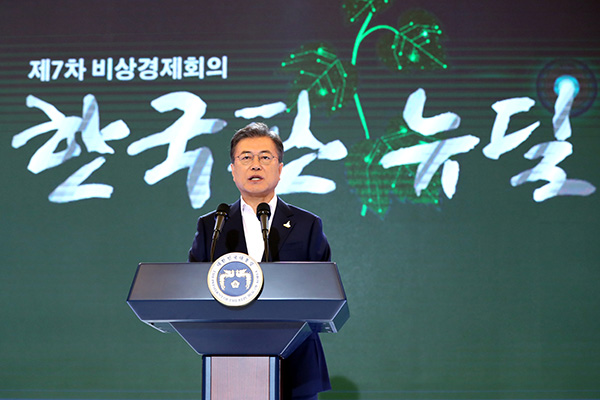 The South Korean government pledged to inject some 160 trillion won by 2025 to create one-point-nine million jobs through the "Korean New Deal" initiative.

In announcing a detailed plan for the initiative on Tuesday, President Moon Jae-in said the New Deal project is a declaration to transition into a world-leading nation in the post-coronavirus era.

Under the plan, 114 trillion won will be pulled from state coffers during the five-year span and the rest will be funded by the private sector and regional governments.

The president vowed to inject 68 trillion won, including 49 trillion won from the central government budget, into the project by the end of his term in 2022 so "palpable changes" will be made.

With the project, the government also envisions creating one-point-nine million jobs by 2025, including 890-thousand jobs by 2022.

Based on a strong social safety net and job security, the scheme will focus on digitalization and green growth.

The green growth part of the initiative will focus on proactively countering climate change and moving towards the low-carbon economy.
Share
Print
List