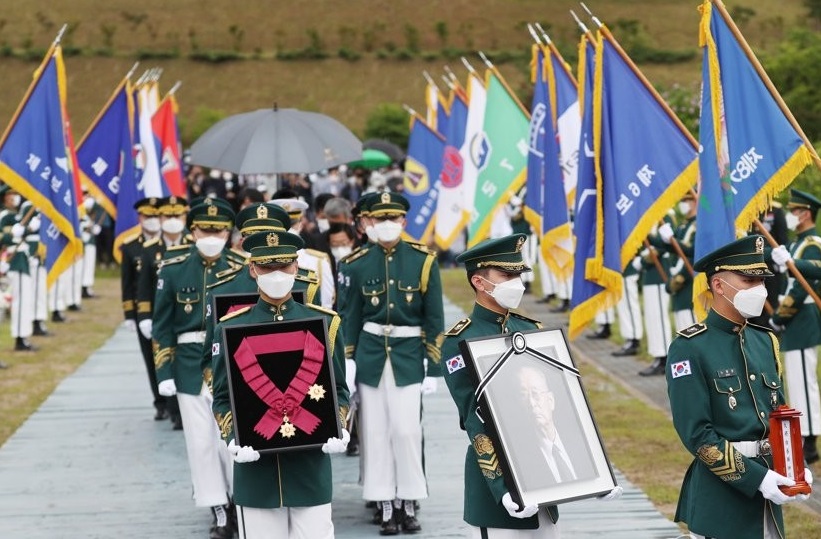 Anchor: South Korea's disputed Korean War hero and first four-star general, Gen. Paik Sun-yup, was laid to rest at Daejeon National Cemetery on Wednesday. The passing of Paik, who was designated a colonial-era pro-Japanese collaborator, has sparked controversy regarding his burial site.
Choi You Sun reports.

The bereaved family, South Korean Army Chief of Staff, U.S. Forces Korea(USFK) commander and veterans paid their final respects to the late Gen. Paik Sun-yup Wednesday, as he was laid to rest at Daejeon National Cemetery.

Soil from eight hard-fought battles during the Korean War, which Paik had previously selected, was scattered over the gravesite in remembrance of the war hero.

Paik's shroud resembled the very combat uniform he wore out on the battlefield.

At a funeral service earlier in the day, Army Chief of Staff Gen. Suh Wook vowed to exert all-out efforts toward continuing to defend the country, which Paik and his comrades protected with their "blood, sweat and tears."

Calling Paik "a patriot, a soldier's soldier and one of the founding fathers" of the ironclad South Korea-U.S. alliance, USFK commander Gen. Robert Abrams said, "Farewell friend and rest in peace."

The country's first four-star general, who died last Friday at the age of 99, was credited for leading key battles during the Korean War and contributing to the modernization of the armed forces.

There has been controversy, however, over a decision by the government and Paik's family to lay the war hero to rest at Daejeon National Cemetery, due to his record of service in the Japanese Army during Japan's colonial rule over Korea.

While many conservatives argue that Paik should be buried at Seoul National Cemetery along with his comrades, some liberals are even opposed to his burial in Daejeon, citing his inclusion on a list of pro-Japanese collaborators in 2009.