Prime Minister Calls on People to Avoid Going Out during Rainstorms 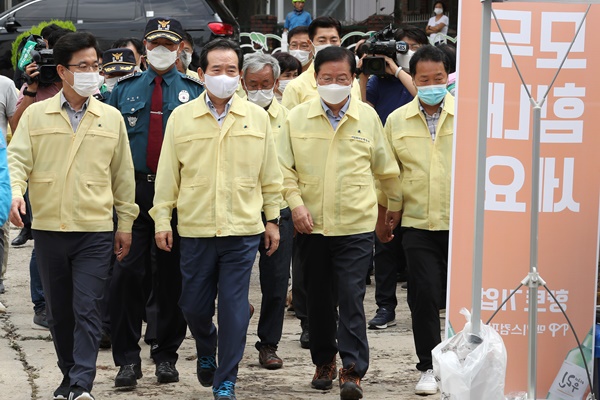 Prime Minister Chung Sye-kyun on Monday called on the public to refrain from going or working outside during the heavy rain as losses continue to mount due to the recent torrential downpours.

At a meeting on the situation in Seoul, Chung urged people to avoid harm by listening to weather information and public service announcements.

He also called on relevant government organizations and local authorities to close regularly flooded areas such as underpasses and riverside roads when heavy rain warnings are in effect.

While noting that public officials might be fatigued from responding to COVID-19 and the rain, he called on them to do their utmost since protecting lives and property is the most basic responsibility of the state.

He called for particular care for the safety of rescue workers and on-site local officials to prevent further losses.
Share
Print
List