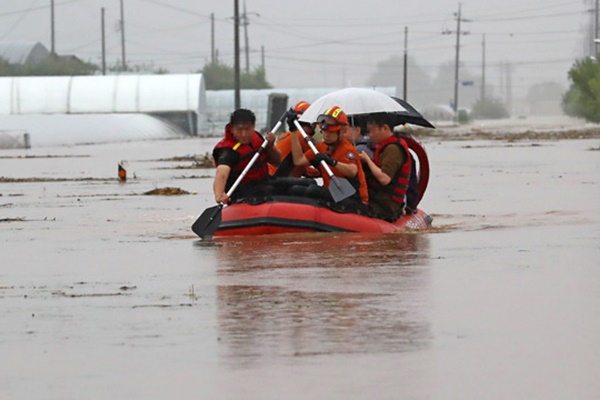 Some 15 people are dead and 11 missing as of Wednesday morning as heavy rain warnings were declared in South Korea's central region and the northern part of North Gyeongsang Province.

The number of displaced people due to the rain currently totals one-thousand-587 nationwide. Of these, only 444 have returned home, while one-thousand-146 remain uprooted.

Some two-thousand-385 people have been evacuated to local gyms and village centers, with Gyeonggi Province accounting for the majority with one-thousand-515 evacuees.

There have been four-thousand-281 instances of facility damage nationwide, while six-thousand-525 hectares of farmland have been damaged.

Some one-thousand-273 homes have been damaged, as have 705 livestock warehouses and 148 greenhouses.

Additionally, 936 roads and bridges and 568 sections of railway have been reported damaged, while there have been 277 landslides. Of the 28 sections of major roads that have suffered damage, two parts of National Road 44 in Inje, Gangwon Province, remain completely closed.
Share
Print
List