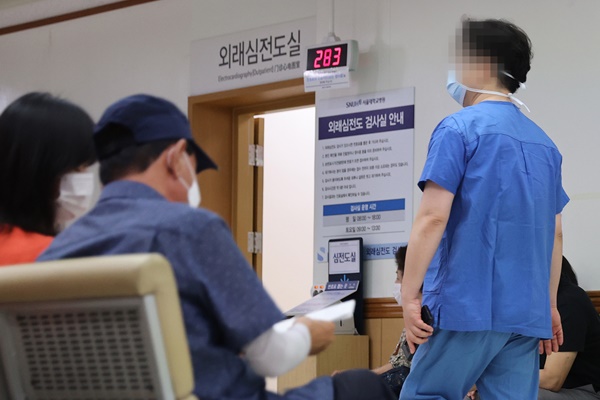 Anchor: Despite the government and the medical community's last-ditch efforts, a group representing the country's trainee doctors launched a one-day strike in protest of the government's expansion of medical school’s admission quotas.
Choi You Sun reports.

Report: Starting at 7:00 a.m. Friday, some ten-thousand intern and resident doctors began a 24-hour strike in protest of the government's medical workforce reforms.

The Korean Intern Resident Association(KIRA) estimates that around 70 percent of its members are participating in the walkout.

Although trainees assigned to essential duties in intensive care units, surgery and emergency rooms are also participating, there were no major disruptions in services after major general hospitals in Seoul secured substitutes.

This comes as the government announced plans to expand admission quotas at medical schools by four-thousand over the next decade and to open a new public medical school in an effort to broaden the reach of health care services.

Talks between the KIRA and the government fell through the previous day with the association arguing that the government's "hasty and unilateral" decision to simply expand the quotas may lead to insufficient medical training.

The Health Ministry plans to set up a consultative body to discuss ways to improve regional health care services and the medical training environment with the KIRA next week.

As the 130-thousand-member Korea Medical Association(KMA) is also set to stage a strike next Friday, the ministry said it is monitoring the situation to ensure that there's no damage to the public's health and safety.
Choi You Sun, KBS World Radio News.
Share
Print
List