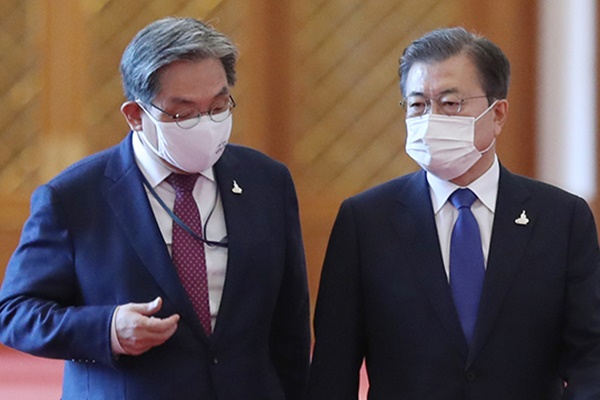 Anchor: The nation's top presidential secretaries have offered to resign on the heels of criticism over the government's attempts to tame soaring real-estate prices, which have been largely ineffective so far. Making matters worse, a number of key presidential aides became the targets of public criticism for their apparent reluctance to sell apartments in expensive neighborhoods, defying the president's instructions.
Sam Len reports.

President Moon Jae-in has yet to accept the resignations.

The official explained that the chief presidential secretaries offered to resign to take responsibility for the "recent situation." When asked if public criticism over the government's real-estate regulations played a role in their resignation offers, the official said their decision was based on "comprehensive" factors.

The government has announced 23 different sets of real-estate regulations since late last year to cool the red-hot property market in the capital Seoul, but apartment prices have refused to trend down. This prompted the government to declare a war on multiple home owners, especially in affluent parts of Seoul.

In order to set an example, the presidential chief of staff last month issued a strong advisory urging senior presidential aides to sell off their extra homes.

Currently, eight presidential aides own multiple homes and every one of them have agreed to unload their extra houses, according to the presidential office.

But after issuing the advisory, the chief of staff was discovered to have chosen to keep his expensive apartment in southern Seoul, while selling another one he owns in a smaller city. The chief of staff eventually sold both apartments, but the damage was apparently done.