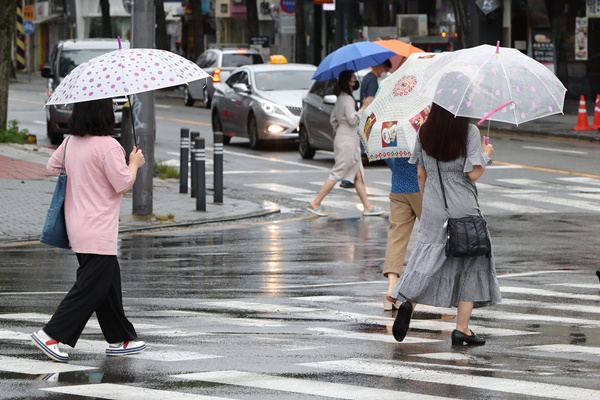 Heavy rain is expected to continue into the weekend in the central region of the country, with cloudy skies forecast nationwide.

About 100 to 200 millimeters of rain is expected in Gyeonggi, southwestern Gangwon, both Chungcheongs, North Jeolla and North Gyeongsang provinces through Saturday, while some areas will report over 300 millimeters.

Anywhere from 50 to 100 millimeters of rain or as much as 150 are expected in the capital Seoul as well as northern Gyeonggi, the rest of Gangwon, South Jeolla and South Gyeongsang provinces.

Jeju Island, Ulleung Island and the Dokdo islets are forecast to receive 20 to 60 millimeters of rain.

Saturday's morning low will be similar to Friday, ranging from 20 to 25 degrees Celsius. It will be 22 degrees in Seoul. Afternoon highs will be about two degrees lower than Friday with 28 expected in Seoul and 24 to 29 degrees nationwide.
Share
Print
List