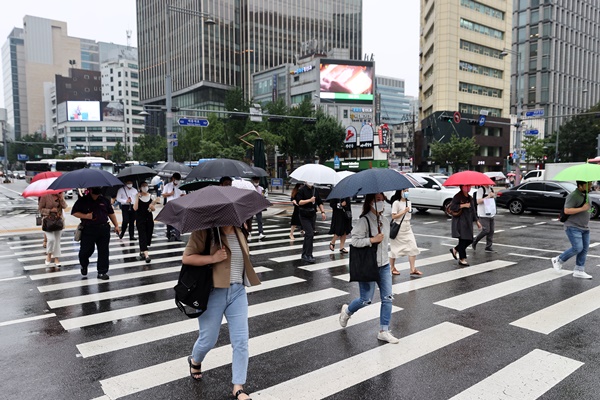 As strong rains continue nationwide, South Korea could also be bracing for a typhoon next week.

Rain will continue in the Chungcheong provinces and the country's southern region on Saturday while heavy downpours will begin later in the day in the capital area and Gangwon Province.

Through Sunday, 100 to 200 millimeters or in some places as much as 300 millimeters are expected in Seoul, Gyeonggi, western Gangwon and the Chungcheong provinces.

Some 50 to 150 millimeters is forecast in eastern Gangwon Province and southern parts of the country, with as much as 250 millimeters possible in some areas.

A large amount of precipitation is expected all the way through Friday next week, especially in the central region. The Korea Meteorological Administration said downpours in central areas could start early from Saturday evening and urged preparations and precautions.

Meanwhile, a tropical low pressure system near the Philippines is currently moving north toward the Korean Peninsula, which could possibly develop into a typhoon.

A KMA official said its movement is being closely monitored but regardless of whether the system develops into a typhoon or not, rain and wind will likely affect South Korea from Monday.
Share
Print
List