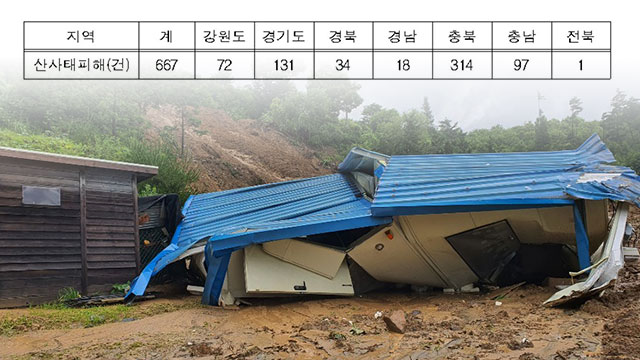 Landslide warnings and advisories have been issued for about 80 cities, counties and districts across the nation as of 7 a.m. Sunday amid the prolonged monsoon rains.

Landslide warnings are in place for 24 areas including the Suyeong District in Busan, Gwangju and Sejong cities, with landslide advisories issued for 57 areas including Incheon, Daegu and Goyang cities.

The Korea Forest Service said that the nation witnessed 55 landslides Saturday alone due to the torrential rains in the southern region, with a total of 667 landslides reported across the nation this month.

The service issued its highest landslide warning for all of mainland South Korea on Saturday as the weeklong rain that wreaked havoc across the nation raised the risk of major landslides.
Share
Print
List