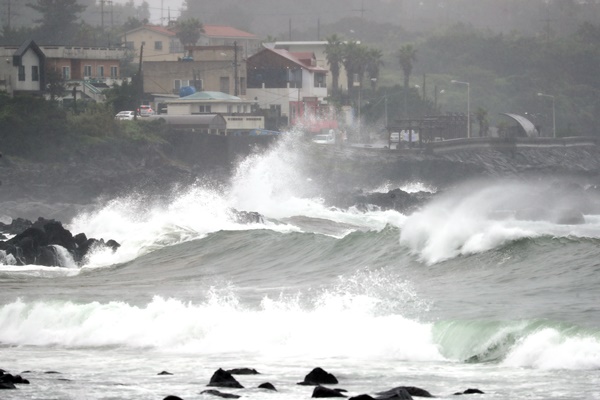 Authorities in South Korea issued typhoon, high seas and heavy rain advisories for the country's southern regions as of 11:10 a.m. Monday, as Typhoon Jangmi makes its way north towards the Korean Peninsula.

The KMA said as of 11:20 a.m., Typhoon Jangmi was traveling north-east at a speed of 40 kilometers per hour from waters 121 kilometers east-south-east of Jeju Island's Seogwipo region.

The typhoon is expected to travel past the southeastern city of Tongyeong at around 3:00 p.m., before nearing Busan about an hour later.

Heavy rain advisories were issued for parts of North Gyeongsang Province, Hwasun in South Jeolla Province, parts of eastern Gangwon Province, as well as the five northwestern border islands in the Yellow Sea.

Precipitation of between 30 and 150 millimeters is in the forecast for parts of North Gyeongsang Province, Hwasun in South Jeolla Province and eastern Gangwon Province.