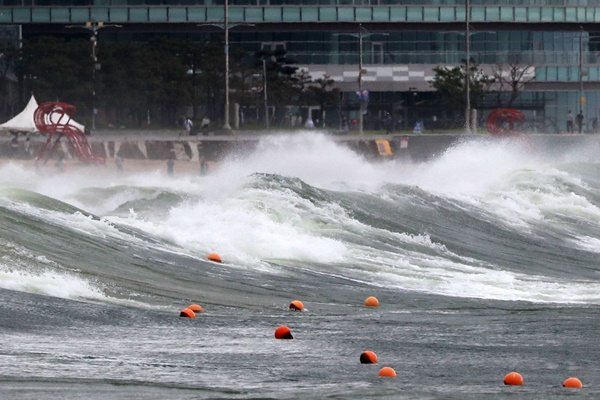 Anchor: South Korea, which has been flooded by torrential rain since the beginning of the month, is now concerned about possible damage from Typhoon Jangmi, which landed near the southeastern coast Monday afternoon.
Choi You Sun reports.

Report: The season's fifth Typhoon Jangmi, which traveled past the country's southernmost Jeju Island earlier Monday, landed in southern parts of Geoje Island near the southeastern city of Tongyeong at around 2:50 p.m.

As the typhoon is expected to move towards Busan by around 4:00 p.m., up to 150 millimeters of rain are forecast to flood the southeastern port city, nearby South Gyeongsang Province and along the southern coast until Tuesday.

South Jeolla Province in the country's southwest is also seeing around 40 millimeters per hour of rain.

Typhoon advisories were issued for the two southern provinces, the southeastern cities of Ulsan and Busan, as well as Jeju Island Monday morning, but the advisory on Jeju has since been lifted.

Concerns about possible damage from the typhoon are on the rise, especially after the country was dealt a heavy blow from the recent monsoon rain.

The death toll from the downpours since August 1 has risen to 31, while eleven others remain missing. Some six-thousand people have been displaced in eleven cities and provinces.

Prime Minister Chung Sye-kyun called for the prompt designation of the rain-battered southwestern Jeolla provinces as special disaster areas, after the government designated seven cities and counties in the central region last week.

Typhoon Jangmi, meanwhile, is predicted to move northward to Pohang by around 6:00 p.m., before leaving the peninsula through the East Sea.
Choi You Sun, KBS World Radio News.
Share
Print
List