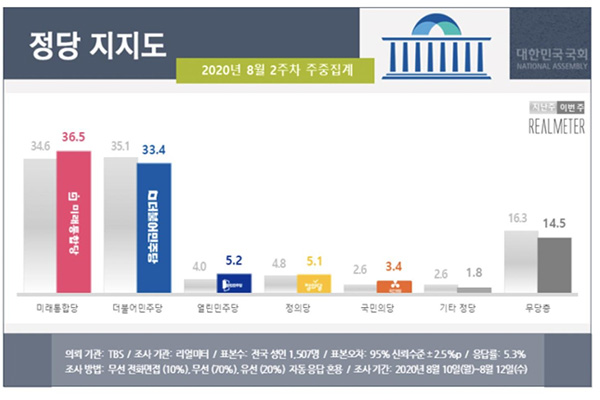 Anchor: For the first time since October 2016, just before the impeachment of former President Park Geun-hye, support for the conservative main opposition United Future Party(UFP) has surpassed that of the liberal ruling Democratic Party(DP). This comes amid public backlash over the government's real estate policies.
Choi You Sun reports.

The survey of one-thousand-507 adults nationwide from Monday to Wednesday also found that 36-point-five percent support the main opposition United Future Party(UFP), up one-point-nine percentage points from the previous week.

It's the first time public support for the conservative main opposition has surpassed that of the liberal ruling party since October 2016, just prior to the impeachment of former conservative President Park Geun-hye.

The pollster also cited UFP Rep. Yun Hee-suk's viral speech on the government's real estate policies, the UFP's flood recovery efforts in the Jeolla provinces and the call for a fourth extra budget for flood relief amid public backlash over the real estate policies.

The DP lost support in the Jeolla provinces, its traditional stronghold, as well as in the swing region of the central Chungcheong provinces.

In contrast, the UFP gained support in not only its traditional stronghold, the Gyeongsang provinces, but also in Seoul and the central Chungcheong provinces.

The survey, commissioned by TBS, had a confidence level of 95 percent, with a margin of error of plus or minus two-point-five percentage points.
Choi You Sun, KBS World Radio News.
Share
Print
List