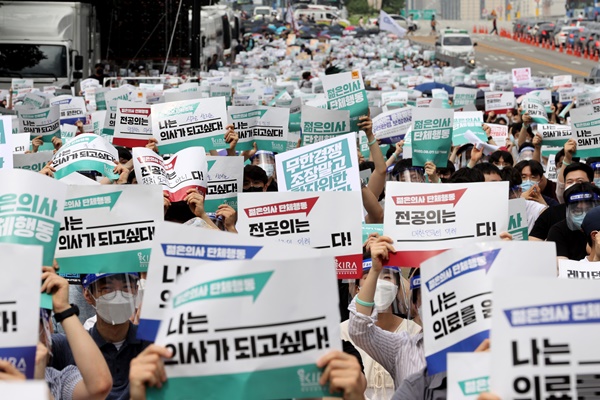 A labor union that represents healthcare workers in South Korea other than doctors has voiced its support for the government’s plan to increase the number of doctors.

The Korean Health and Medical Workers’ Union(KHMWU) said on Thursday that there should be more personnel in the healthcare and medical service industries, including doctors, to safeguard lives and safety.

It said the current shortage of doctors has led to rampant illegal behavior such as entrusting nurses with duties that should be performed by doctors such as offering diagnoses, filling out prescriptions and even stitching up patients after operations.

The union's statement comes as physicians nationwide plan a large-scale walkout on Friday over the government’s plan aimed at enhancing medical services in regional areas, arguing that the government should instead incentivize doctors to work in local areas.

However, Na Soon-ja, the head of the KHMWU, said that doctors at major public hospitals in local areas are already receiving as much as over 500 million won in yearly salaries and further incentives won't induce doctors to move to provincial areas.

The union said it also supports the government’s plan to establish a public medical school.

According to the union’s web site, the union has around 72-thousand members, who are working in around 180 medical and welfare facilities and represent around 60 medical industry-related vocations, including nurses, nursing assistants, medical technicians, pharmacists and dietitians.
Share
Print
List