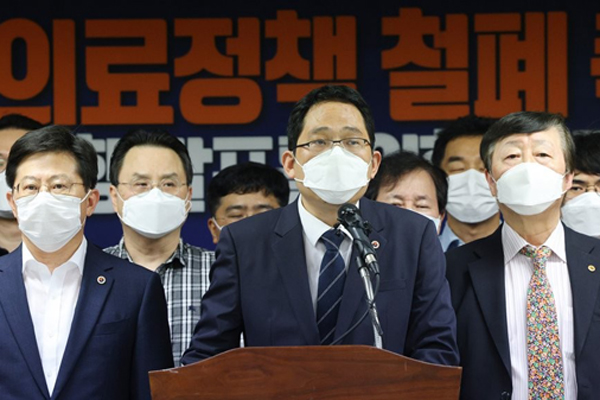 The Health Ministry and the Korean Medical Association(KMA) have failed to iron out differences over the government’s medical reform plan, including increasing the number of licensed doctors.

Health and Welfare Minister Park Neung-hoo and KMA chief Choi Dae-zip held around two hours of discussions at a Seoul hotel on Wednesday.

However, the minister told reporters after the meeting that the two sides were unable to reach an agreement. He added the KMA’s additional walkout plan was not discussed during the meeting.

The physician’s association held a strike to protest the government's move last Friday and threatened a follow-up strike for three days from next Wednesday.

Minister Park said the government is still willing to hold talks if doctors come up with a better solution than the government's aim of increasing admission quotas at medical schools to resolve an imbalance of practicing physicians in Seoul and other parts of the country. He also said the government plans to revise and complement its earlier proposals for medical reform.
Share
Print
List