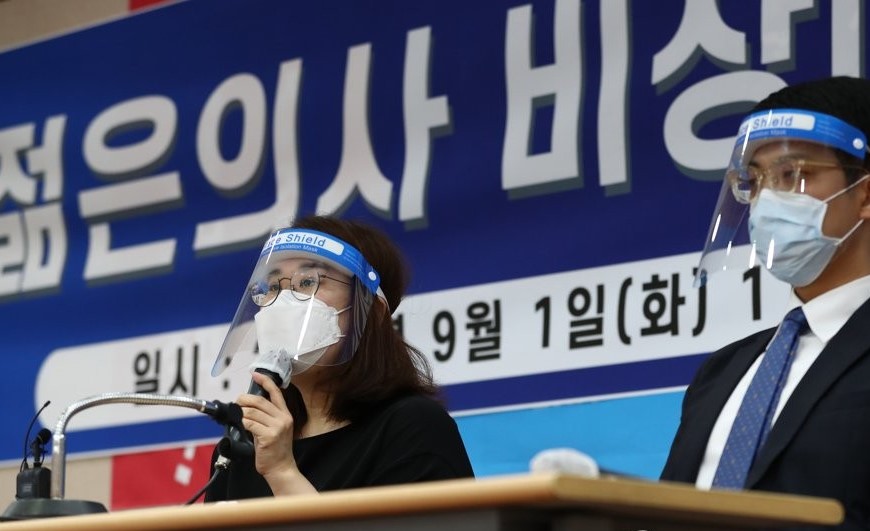 Anchor: An association representing intern and resident doctors, who are entering the 12th day of a strike, has joined forces with medical students and full-time physicians in demanding the government withdraw its healthcare reform plans. The government says some of the reforms cannot be retracted as that would be in violation of related laws.
Choi You Sun reports.

Report: As trainee doctors enter their 12th day of strike in protest of the government's healthcare reforms, the emergency committee of the Korean Intern and Resident Association(KIRA) has joined forces with medical students and full-time doctors.

Through the alliance, they launched the "young doctors' emergency task force" on Tuesday to demand the government withdraw the reforms, including expanding admission quotas at medical schools and establishing a public medical school.

At a press conference, KIRA said the reform measures would not offer the right solution to the issues of doctors shirking specialization in compulsory medical fields and the lack of doctors in provincial areas.

KIRA said such issues should be resolved through changing the prices of medical services in the countryside and enhancing healthcare infrastructure.

The government, for its part, argued that it has already suspended the reforms to engage in talks with the medical community, but that some of the reforms cannot be retracted due to violations of national health insurance and parliamentary laws.

The government also urged the doctors to clarify whether they want the government to abuse its authority or simply oppose the planned increase in the number of doctors in the country.

KIRA, meanwhile, said it is open to engage in debate with the government on the reforms, after the government said it would actively pursue such public discussion.
Choi You Sun, KBS World Radio News.
Share
Print
List