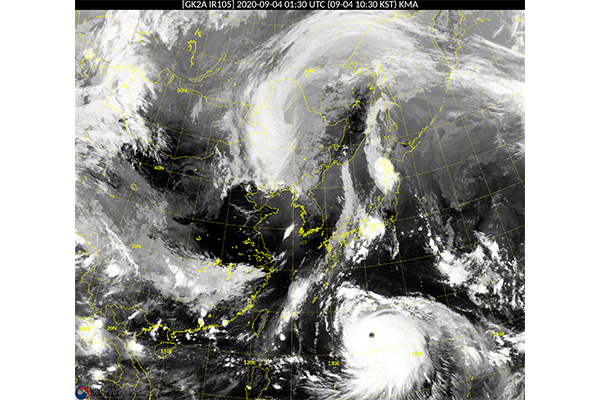 This season's tenth typhoon, Haishen, has shifted trajectory and is now expected to pass to the east of South Korea.

It was earlier expected to pass right through the middle of the country, but is now forecast to head north through waters off the east coast.

According to the forecast the Korea Meteorological Administration announced at 10 a.m. Saturday, Haishen is currently moving north near Okinawa, Japan at a speed of 15 kilometers per hour.

It is a "very strong" typhoon at the moment with a central pressure of 920 hectopascals and winds reaching up to 53 meters per second.

With a change in its travel path, KMA expects that by the time it nears the Korean Peninsula, Haishen will move further east and is most likely to skirt the eastern coast of the Gyeongsang region on Monday.

However the expected route and strength could change depending on how it passes through Japan.

The weather agency said that even if the travel path moves to the east, all of South Korea will be under the influence of the powerful typhoon, and called for thorough preparations.
Share
Print
List