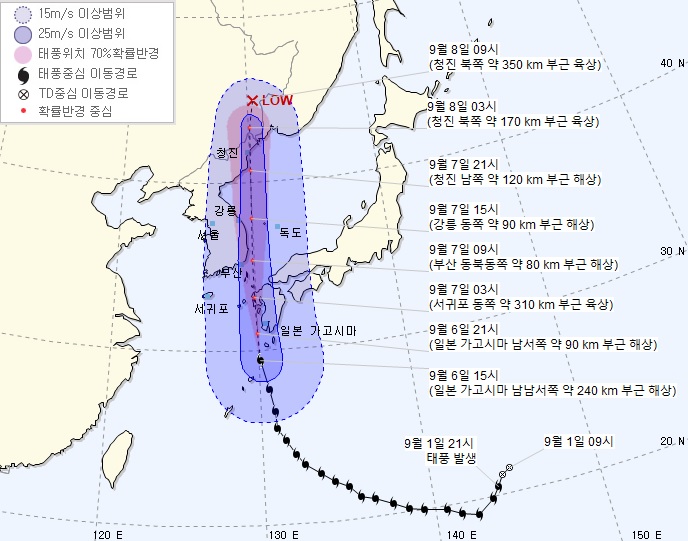 Powerful typhoon Haishen is expected to bring heavy rain and strong winds to South Korea on Monday as it is moving closer to the Korean Peninsula.

According to the Korea Meteorological Administration (KMA) on Sunday, the season's tenth typhoon is heading north near the northeast part of Japan's Okinawa Island at a speed of 22 kilometers.

It is a "very strong" typhoon at the moment with a central pressure of 953 hectopascals and winds reaching up to 49 meters per second.

The weather agency expects the typhoon will pass west of Japan's Kyushu region at around 9 p.m. Sunday and reach waters 80 kilometers east of South Korea's southern port city of Busan at about 9 a.m. Monday, where it is then forecast to move north along the country's eastern coast.

The typhoon is expected to bring 100 to 300 millimeters of rain to the eastern parts of Gangwon Province, Gyeongsang provinces, Ulleung Island and the Dokdo islets in the East Sea, with some of the areas likely to receive more than 400 millimeters.

Mountain areas on Jeju Island and Mount Jiri are forecast to have more than 300 millimeters of rain, while parts of Jeolla Provinces and Jeju Island are likely to be hit with about 100 to 200 millimeters.
Share
Print
List