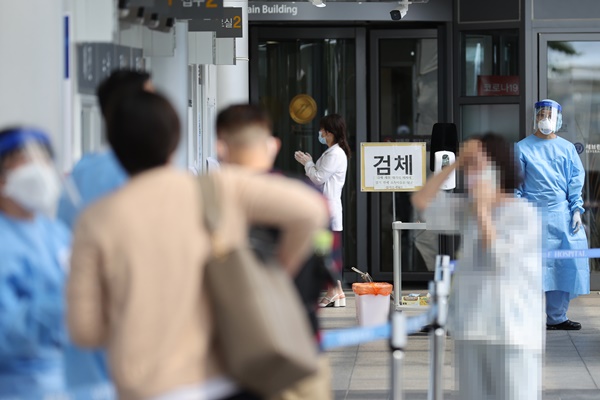 Anchor: Friday marks exactly six months since the World Health Organization announced the COVID-19 outbreak as a global pandemic. And so far, 30 million people around the world have tested positive for the virus, while more than 900-thousand have died.
In South Korea on Friday, more than 170 new coronavirus cases were reported, while four more people died from the virus.
Sam Len reports.

Report: South Korea reported 176 new COVID-19 cases as of 12 a.m. Friday, which was the highest in a week albeit the ninth-straight day of infections below 200.

The cumulative total has reached almost 22-thousand people, while the death toll has risen to 350.

Yoon Tae-ho, director general for public health policy at the Ministry of Health and Welfare, said the number of infections is showing no signs of easing.

[Sound bite: Yoon Tae-ho, director general for public health policy - Ministry of Health and Welfare (Korean/English translation)]
"There are three days left until strengthened social-distancing measures are set to end. A sharp resurgence has been controlled, while the daily number of infections has fallen from more than 400 to less than 200. This was due to the active cooperation of the public ... [and] we thank you. But we cannot let our guard down, because cluster infections continue to be reported, while a visible decline in new infections does not seem to be happening."

What's especially worrying for health officials is that cluster infections continue to be reported in the greater Seoul area, including a major hospital in the capital, and also in other parts of the country.

Prime Minister Chung Se-kyun urged Koreans to refrain from traveling to their home towns during the upcoming Chuseok thanksgiving holiday.

[Sound bite: Prime Minister Chung Se-kyun (Korean/English translation)]
“I earnestly ask the public to refrain from visiting your home towns or moving about during Chuseok, in order to protect the health of elderly family members. I know this can be disappointing, but it will be better for our loved ones if we share our love for our family members from a distance this Chuseok."

The prime minister said the government will decide in a few days whether to extend strengthened quarantine measures that are scheduled to end on Sunday.
Sam Len, KBS World Radio News.
Share
Print
List