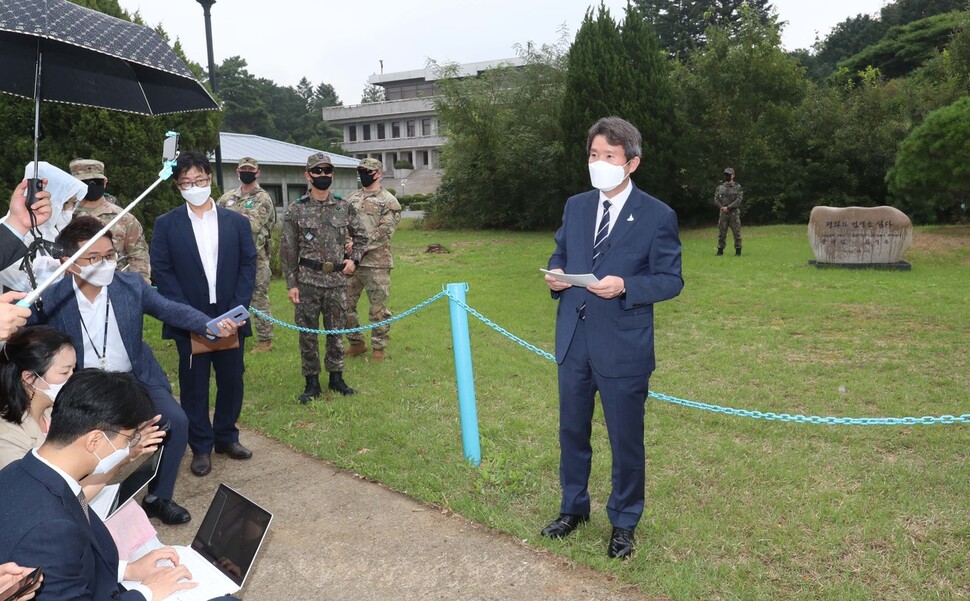 Anchor: Seoul and Washington are working to revive the dying momentum for talks with North Korea. While Seoul's Unification Minister Lee In-young renewed a call for reconciliation at the truce village between the two Koreas, U.S. Secretary of State Mike Pompeo also revealed that efforts are still ongoing with North Korea.
Kim Bum-soo has wrapped up the latest.

[Sound bite: Unification Minister Lee In-young (Korean/English translation)]
"When the coronavirus situation stabilizes, I hope we will be able to swiftly resume field tours to the Panmunjeom [truce village] and the DMZ peace trail programs, starting from as early as October, and also propose small-scale reunions of [Korean War] separated families."
"Humanitarian cooperation in the fields of medicine, quarantine and climate change must continue at a certain annual level based on South Korea-U.S. communication in order to build trust among South and North Korea and the U.S."

Shortly after the inter-Korean summit in Pyongyang two years ago, cross-border relations quickly deteriorated in the wake of the collapse of the Washington-Pyongyang summit in Hanoi last year.

With the Trump administration refusing to ease any sanctions, North Korea in June heightened tension with the explosive demolition of the inter-Korean liaison office, blaming Seoul for anti-Pyongyang leaflet campaigns by defector-led civic groups in the South.

[Sound bite: Unification Minister Lee In-young (Korean/English translation)]
"The demolition of the inter-Korean joint liaison office is certainly regrettable. However, we recognize Chairman Kim Jong-un's order to stop military action against the South as an effort to prevent escalation of further tension."
“The North has also removed loudspeakers it was reinstalling in response to leaflet campaigns by a few groups in the South and also suspended preparations for anti-South leaflet activities.”

As Seoul tries to kick start the stalled relationship, U.S. Secretary of State Mike Pompeo held an interview with think tank Atlantic Council on Tuesday, and suggested denuclearization efforts are still ongoing under the surface.

[Sound bite: U.S. Secretary of State Mike Pompeo]
“As for North Korea, which you mentioned, we did have hopes that we could make further progress, that Chairman Kim would go in a different direction, but I am still optimistic. It's gone quiet publicly, but there is still lots of work going on, work going on between ourselves, our allies in the region, the Japanese, the South Koreans, and even efforts with the North Koreans to come to understand where there may be opportunity as time goes on.”