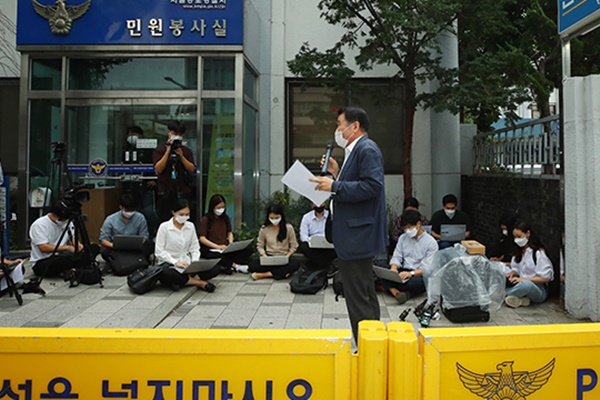 Organizers of the August 15 anti-government rally held in downtown Seoul said Wednesday they will hold another rally at Gwanghwamun Square on October 3, National Foundation Day.

In a news conference, they called on the Moon Jae-in administration to guarantee freedom of assembly and association and accused the government of trampling on people's basic rights to silence their voices.

Choi In-sik, leader of the National Federation for Liberal Democracy, a conservative group that took part in the August 15 rally, said that his group and others will report to authorities their plan to gather on Foundation Day to demonstrate their resolve to fight the Moon administration.

Choi said one thousand people will come out and the protest site will be on a road in a park north of the Sejong Center for the Performing Arts in Gwanghwamun.

He vowed to abide by quarantine guidelines including two-meter distancing, mask wearing and sterilization.

He added the October 3 rally is is unrelated to Sarang Jeil Church, regarded a hotbed of the recent COVID-19 resurgence, and added their fight will continue until President Moon steps down.
Share
Print
List