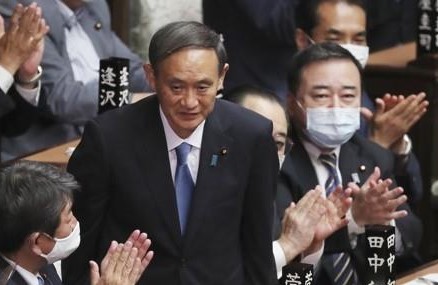 Japan's Cabinet lineup has been finalized under its new Prime Minister Yoshihide Suga.

After Suga's formal appointment in the Diet as the country's 99th prime minister on Wednesday, members of the Cabinet were also announced by the new Chief Cabinet Secretary Katsunobu Kato.

Eleven of the 20 Cabinet positions are filled by existing members of the previous Shinzo Abe administration.

Eight members have retained their posts including Deputy Prime Minister and Finance Minister Taro Aso as well as the ministers of foreign affairs, culture, industry, transportation, environment, economy and the Olympics and Paralympics.

Former minister of health Kato is the new Chief Cabinet Secretary, a post often viewed as the government's mouthpiece.

Defense Minister Taro Kono has meanwhile become the minister in charge of administrative and regulatory reform.