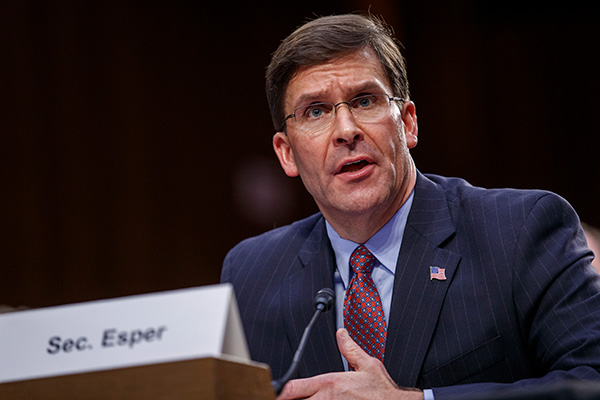 U.S. Secretary of Defense Mark Esper on Wednesday reiterated the need to build a collective security alliance in the Indo-Pacific region.

Speaking in a seminar organized by U.S. think tank RAND Corporation, Esper said that the U.S. needs to focus more on multilateral cooperation than one-on-one alliances.

The U.S. defense chief said there is too much one-on-one, and while the U.S. is very good at these alliances, mentioning Japan, South Korea and Australia specifically, it needs to start doing more on a multilateral platform.

Esper said the U.S. will continue to push and expand the "Quad," the U.S. initiative in the Indo-Pacific to seek closer relations with South Korea, Japan and Australia. He then offered NATO as a good example of collective security and cooperation among allies and partners.

U.S. Deputy Secretary of State Stephen Biegun mentioned the Quad as well last month, saying that there is no structure like NATO in the Indo-Pacific region.
Share
Print
List