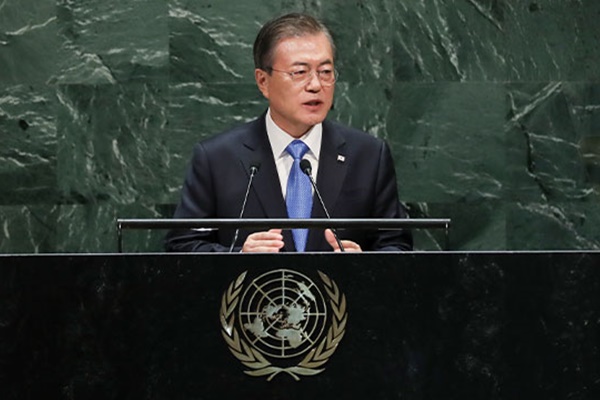 President Moon Jae-in will deliver a speech at the 75th United Nations General Assembly set to be held virtually this year amid the COVID-19 pandemic.

According to presidential spokesperson Kang Min-seok on Thursday, Moon will address the U.N. as the ninth speaker on the first day of the Assembly at around 2:00 a.m. next Wednesday, Korea time.

It will be Moon's fourth attendance at the U.N. Assembly since taking office in 2017.

In his speech, the South Korean president is expected to highlight international solidarity and cooperation in overcoming the COVID-19 crisis and tackling climate change.

He will likely seek international support for Seoul's efforts toward denuclearization and the establishment of lasting peace on the Korean Peninsula.

Moon will also participate in a high-level meeting marking the 75th anniversary of the U.N. on September 21, where he will speak as the leader of the chair nation of the Mexico, Indonesia, Korea, Turkey, Australia(MIKTA) cooperative body.
Share
Print
List