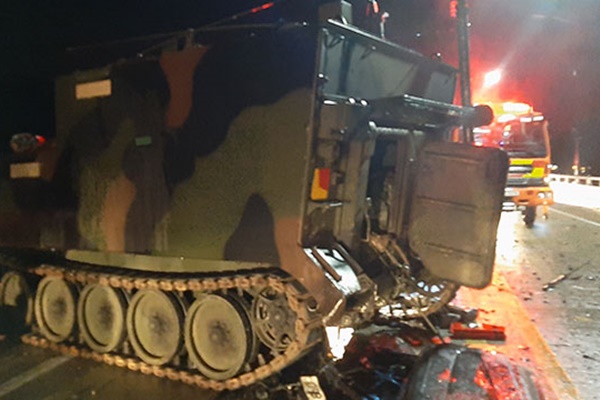 South Korean police presume a fatal crash involving a U.S. armored vehicle in Pocheon, Gyeonggi Province last month was partly caused by drunken driving by the driver of the other vehicle.

The crash occurred on a bridge near the Rodriguez Live Fire Range in Pocheon at 9:30 p.m. on August 30 with a sport utility vehicle carrying two South Korean couples, all in their 50s, ramming a U.S. Forces Korea armored vehicle from behind, killing all in the SUV, including the driver.

The driver of the armored vehicle, an American in his 20s, sustained only a minor injury.

Pocheon Police Station on Thursday said it was notified by the National Forensic Service that an autopsy revealed the driver’s blood alcohol content was high enough to have his driver's license canceled, but did not unveil detailed numbers.

After analysis of the black box and the event data recorder inside the vehicle, police presume it was running at a speed of 100 kilometers per hour or higher at the time of the crash.

Police also suspect another individual in the vehicle was in the driver’s seat before the SUV entered the bridge, possibly also intoxicated and leading to the apparent change of drivers. The postmortem on the man also revealed a blood alcohol content level high enough for license revocation.

Police are continuing their investigation into the case to determine the exact cause of the crash, including the possibility of negligence by the U.S. armored vehicle driver.
Share
Print
List