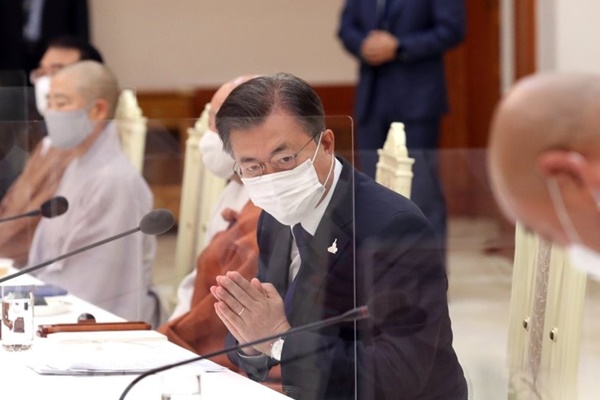 Anchor: The two Koreas on Saturday mark the second anniversary of the September 19 Pyongyang Joint Declaration. President Moon Jae-in is set to deliver a keynote speech by video conference at the United Nations next week, which may contain a new olive branch offered to North Korea.
For now, the president urged patience in engaging the North.
Sam Len reports.

Report: South Korean President Moon Jae-in invited Buddhist leaders to the presidential office on Friday and called for renewed hope in resuming stalled inter-Korean dialogue. The president said South Korea will reach the path of peace and unification as long as it does not give up hope for dialogue with the North.

[Sound bite: President Moon Jae-in (Korean/English translation)]
"Tomorrow marks the second anniversary of the Pyongyang Joint Declaration of September 19. In 2018, I declared with Chairman Kim Jong-un our plan to walk together toward peace on the Korean Peninsula to 80 million Koreans and the entire world. If we do not give up hope on resuming meetings and dialogue, we can certainly go together toward peace and unification."

Moon plans to deliver a keynote speech via video conference at the United Nations next Wednesday and seek international support for establishing peace on the Korean peninsula.

Many experts expect the South Korean leader to present a new offer to North Korea during the UN speech, timed with the second anniversary of the historic inter-Korean summit held in Pyongyang in 2018.

The offer could involve stepped up cross-border cooperation to combat the COVID-19 epidemic in the reclusive country, according to experts. If North Korea accepts the offer, South Korea could expand the aid to help the North recover from typhoon damage last month. The long-term plan is to jump-start projects to reconnect railways that were severed during the Korean War and resume tours to North Korea's Mt. Geumgang, which halted in 2008 after a South Korean tourist was shot and killed.

Earlier this week, Unification Minister Lee In-young visited the border truce village of Panmunjeom and called on Pyongyang to implement agreements reached during the 2018 summit. But the North has yet to respond.
Sam Len, KBS World Radio News.
Share
Print
List