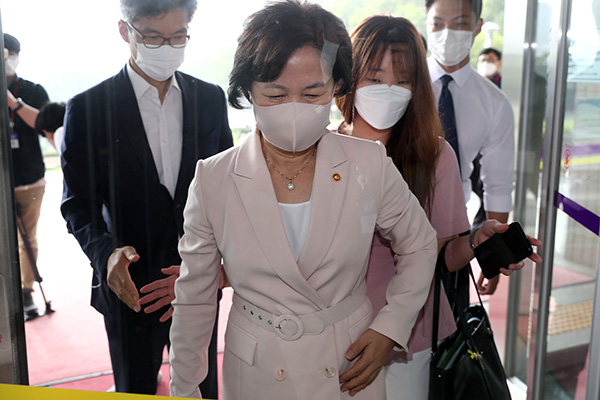 Prosecutors investigating graft allegations surrounding Justice Minister Choo Mi-ae's son, identified by his surname Seo, raided the homes and offices of Seo and others involved in the case.

According to the Seoul Eastern District Prosecutors' Office on Tuesday, investigators searched Seo's residence and office for evidence the previous day.

While serving in the Korean Augmentation to the United States Army(KATUSA) in 2017, Seo is suspected of failing to return to his base before receiving approval for an extra four vacation days after having knee surgery.

It is also suspected that the alleged breach was covered up after a former aide to his mother, who was the then-chair of the ruling Democratic Party(DP), inquired with the military about the extra vacation days.

On Saturday, the prosecution also raided the homes of an Army captain who served as a KATUSA officer at Seo's base at the time and Choo's former aide who inquired about Seo's vacation days.
Share
Print
List