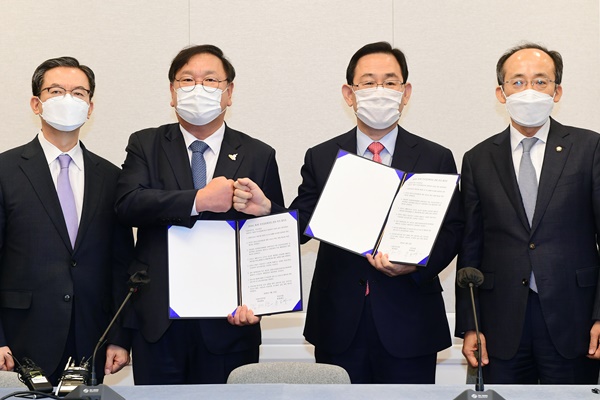 Anchor: South Korea's rival political parties have finally reached a deal on the fourth supplementary budget plan to finance COVID-19 relief. The extra budget bill is expected to be approved by the National Assembly later on Tuesday.
Choi You Sun reports.

Report: Rival parties finally came to an agreement on mobile phone fee reductions among other issues in the fourth supplementary budget plan to finance COVID-19 relief.

[Sound bite: People Power Party floor leader Joo Ho-young (Korean/English translation)]
"This will be a big help for people in need amid the pandemic. I would like to thank DP floor leader Kim Tae-nyeon and Jung Sung-ho, the chairman of the budget and account committee for presiding over the process... "

Under the deal, a 20-thousand-won mobile fee deduction will be offered to people aged 16 to 34 and those aged 65 and older. The ruling party had previously suggested providing the deduction to everyone aged 13 or older, but the main opposition PPP opposed the idea, saying it would not serve to assist those struggling amid the pandemic.

The main opposition previously demanded free influenza vaccinations for all amid concerns over a "twindemic" of the flu virus and COVID-19, but the ruling side opposed, citing a lack of supply.

PPP floor leader Joo said the 530 billion won reduced from the revised plan will be directed towards expanding eligibility for free flu shots to include an additional one-point-05 million people in vulnerable groups.

The one-million-won support for self-employed taxi drivers will also be expanded, now including drivers affiliated with a company. Two million won will be offered to businesses that adhered to the government's quarantine regulations, including temporary shutdowns.

The parties plan to put the bill to a vote at a plenary session later on Tuesday, while the government hopes to complete the relief payments before the Chuseok holiday, which starts on September 30.
Choi You Sun, KBS World Radio News.
Share
Print
List