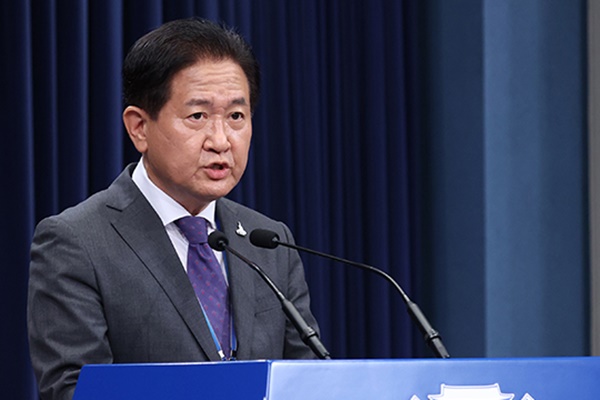 The presidential office has strongly denounced the death of a South Korean fisheries official who was shot by North Korean soldiers near the inter-Korean maritime border.

National Security Council(NSC) Secretary-General Suh Choo-seok told reporters following a NSC emergency meeting on Thursday that the North Korean soldiers’ act of shooting and killing an unarmed South Korean national and damaging the body cannot be justified under any circumstances.

[Sound bite: Suh Choo-suk - deputy director, National Security Council (Korean/English translation)]
"The government expresses deep mourning regarding the death at the hands of the North Korean military of a fisheries official who went missing in the waters near Yeonpyeongdo Island on September 21. We also express the following position:
The North Korean military's murder by gunfire of a South Korean citizen who was neither armed nor showed intent to resist, and the mutilation of the corpse, cannot be justified for any reason.
The South Korean government strongly condemns the act of the North Korean military, which runs counter to international law and humanitarianism.
North Korea must assume sole responsibility for this incident and completely get to the bottom of what happened while punishing those responsible."

He then called on the North to apologize and take active measures to prevent similar incidents from occurring again.

Suh said the government will boost vigilance along the inter-Korean maritime border and take all necessary measures to protect the safety of the South Korean public. He made clear that South Korea will sternly respond to any acts by the North that threaten the life and safety of its citizens.
Share
Print
List